MESSAGE OF THE MONTH 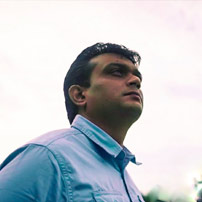 Shiva Prasad is a Mumbai-based management graduate in international business. He chose filmmaking as his career, and worked in Indian and British films. He also worked as a creative researcher for the Hindi feature film Irada, which won the Indian National Award in 2018. He has also been rated as a top photographer on Google Maps. As an extension to his passionate interest in anything smartphone, Shiva is an active stock video producer for leading agencies across the globe.